Welcome to the Beatrice Archives, where you will find rare documents from different eras of the company.  You can choose from annual reports, company prospectus, owners manuals, advertisements, recipe guides, among other hard to find documents.  Originally founded as Haskell and Bosworth in 1894 by George Everett Haskell and William W. Bosworth, and primarily engaged in the sale of poultry, eggs, produce and butter.  Haskell and Bosworth later incorporated in Lincoln, Nebraska as The Beatrice Creamery Company in 1898.  The company change its name to Beatrice Foods Company in 1946 to reflect the change from primarily dairy foods to grocery products.

From 1898 to about 1983, not many knew who or what Beatrice was, but many of the well known brands that Beatrice had acquired over the decades, people were using without really knowing that Beatrice owned them.  For example, in 1901 Beatrice Creamery Company patented the name Meadow Gold as the trade name for its dairy line in the markets that Beatrice had dairy operations.  Beatrice continued to remain in the dairy business until it saw an opportunity to venture into other areas.  LaChoy Chinese foods was purchased by Beatrice in 1943 which was to become the companies first venture into other foods products.  Other notable products and companies that were to become part of Beatrice are listed on the Beatrice Products Page.  It wasn’t until 1983 that then Beatrice Companies, Inc. CEO James L. Dutt decided that Beatrice needed a unified identity hired Lipson Alport Glass & Associates to design a completely new identity for the new Beatrice.  Beatrice Foods Company, which changed its corporate charter to become Beatrice Companies, Inc. in 1984, to reflect the general purpose of Beatrice of being more than just a food company.  Beatrice was instantly recognized when during the Olympics in 1984 the company debuted the Beatrice commercials that, at the end of each commercial there was a soft female voice that said; “We’re Beatrice”.

But this is not what made Beatrice a success in the business world, but rather the decades old company practice of decentralized management, which was the envy of other companies.  At the 87th annual meeting of Beatrice stockholders on June 5th, 1984, stockholders of record were asked to change the name of the company. “Recognizing this clear departure from the past, we are proposing a new name for the company. At our annual meeting in June, stockholders will be asked to change the name to Beatrice Companies, Inc. from Beatrice Foods Co. This change is appropriate given the company’s evolution and present composition. It reflects Beatrice’s wide range of separate and distinct businesses, many with operations totally unrelated to food processing, yet retains the company’s goodwill and reputation for quality products and services.” Annual Report, February 29, 1984.

In June 1984, Beatrice acquired Esmark, Inc. Esmark.  The Esmark acquisition was part of the company’s strategy to focus Beatrice’s assets in food and consumer products businesses.  Because of Esmark’s national brands, direct sales force, distribution network and research and development capabilities, its acquisition was expected to accelerate the attainment of Beatrice’s marketing goals. Many analysts believe this acquisition, which was pushed by then Chairman, Chief Executive Officer and President James L. Dutt, put too much of a debt load on Beatrice, which hurt Beatrice’s credit rating and therefore deflated the value of Beatrice stock valuation.

In 1986, Beatrice became the target of leveraged buyout specialists Kohlberg Kravis Roberts & Co. They ultimately took over the firm for $8.7 billion — at the time the largest leveraged buyout in history, and over the next four years sold it off, division by division.

When KKR came on board, they sold the Beatrice Dairy Products, Inc. subsidiary, which included the brands of Meadow Gold, Hotel Bar Butter, Keller’s Butter Mountain High Yogurt, and Viva Milk Products, to Borden, Inc. in December 1986 for $315,000,000 million.

In 1986, investment firm Wesray Capital Corporation, acquires Avis Rent a Car System for $263 million plus the assumption of debt.

In 1986, Beatrice’s Coca-Cola bottling operations were acquired by Coca-Cola Enterprises, Inc. for $1 billion.

In 1987, KKR had formed a new entity, with similar intent as E-II Holdings, called Beatrice Company, which was specifically created to include Beatrice Cheese, Inc., Beatrice-Hunt/Wesson, Inc., and Swift-Eckrich, Inc., which were the last remaining food business units of the Beatrice U.S. Food Corp. operations.  In 1990, KKR sold Beatrice Company to CAGSUB, Inc., a wholly-owned subsidiary of ConAgra, Inc.  Most of Beatrice’s brand names still exist, but under various other owners, as trademarks and product lines were sold separately to the highest bidder.

Here are some interesting facts about Beatrice Foods that are not widely known, and are almost unheard of in today’s corporate world:

A World of Beatrice Brands Letter- 1969

The World of Beatrice Brands- 1972

This hand, easy to carry, booklet has been carefully prepared and is published to help you readily identify the rank and service of our fighting men and women.

Donald P. Kelly – Chairman of the Board, CEO and Director of BCI Holdings Corporation, from 1986-1988

¥Fredrick B. Rentschler – Director, President and CEO of Beatrice Company, from 1988-1990

Beatrice Name Change Through Its History

ȹ2007, After a hiatus, Beatrice Companies, Inc. is reactivated.

Financial Analysts. This particular piece was by Wallace N. Rasmussen, President and Chief Executive Officer in 1976:

Let’s look at this difference
— Our senior and corporate executives have no special privileges.
— They work as many hours as other management people in the company.
— An open door policy applies at all levels of management. Any employee has the opportunity for direct communication with executive
officers and others on down the line.
— In keeping with the open door policy, we listen to everybody concerned in a situation. We don’t make shoot-from-the-hip decisions. After we have listened and done our research, then we try to make the right decisions and move quickly on them.
— We stress management productivity. We ask how do our managers spend their time? Too much time in needless meetings? Too much time on insignificant projects? Do our people
— individually — have a built-in routine or checking system to assure that we are working on the important tasks?
— We ask: Do we begin the day with a plan, starting with the most difficult and productive work, or do we take on the endless detail of the job and find ourselves with no time left for making any headway on the innovative work or work we subconsciously view as “extra”? Often, it’s this extra work that has the true rewards in value to Beatrice and, consequently, in the individual’s satisfaction in a job well done.
— We ask our people to watch company expend- itures as they do their own.
— We never accept anything as gospel, but continually re-examine assumptions since everything changes.
— We avoid “pie in the sky” or over-elaborate planning. We develop plans for sales, earnings and cash needs for one year, two years, three years — yes, even five years out. We keep plans simple and on target with the real job, and avoid planning for appearance’s
— The phrase “think big, think small” applies to all functional areas of work at Beatrice. “Think big” means that all management people must have broad overall plans and objectives. But they should not set themselves up as super executives who consider detail too mundane to follow. “Think small” means keeping a balance between detail and broader management aspects without becoming detail-oriented.

Decentralization, a word common to many corporations, is more than a word at Beatrice.
It’s 14 divisions, 54 groups and 400 profit centers.
It’s management productivity — or the work ethic.
It’s aggressiveness in pursuing profits.
It’s giving away enough of your job to subordinates to enable them to share in the “fun” of work.
It’s maintaining a climate that encourages people to work to their fullest capacity without undue interference and it’s continually guarding against inroads that threaten this keystone of Beatrice’s success.
Decentralization is permitting the profit center manager to be the “president” of his “company.” Of allowing him to make all operating decisions other than how the profits will be spent. He develops his own successor. He decides what products to produce, how they should be merchandised, how they should be marketed and how they should be priced. The result is that we have 400 managers who are equipped through operating experience to “run” a company rather than just carry out directives from a higher authority. Finally, the most critical and characteristic attribute of the Beatrice Way:

Maintain an atmosphere that allows — in fact, encourages — individuals to commit themselves to job responsibility.

Two words we use constantly.
First, balance. Maintain balance in your own life, your job, your product mix and the people in your organization.

Top management continually evaluates how its Actions and those of the corporate office affect the company. Each of us makes critical self-evaluations of how our actions or lack of actions affect the attitudes of the people on our teams.

A critical area of responsibility shared by each Beatrice manager is the bottom line — profit. In being responsible for keeping the balance between people and expenditures, he watches cash flow to insure his operation justifies capital expenditures. He also takes responsibility for improved dollar sales and dollar units of productivity per employee.

We must face up to the responsibility for our free market system. We must increase our efforts to convince people that American business is critical to the nation’s growth.

My intention has been to try to outline what I see as the “secrets” of Beatrice. Call it what you want:
A Beatrice tradition or philosophy, or just good management. It’s something special, something we don’t want to lose and something I hope each and every one of our management people strives to pass on and fights to prevent losing.

Originally founded as Haskell and Bosworth in 1894 by George Everett Haskell and William W. Bosworth in Beatrice, Nebraska, and later incorporated in Lincoln, Nebraska as The Beatrice Creamery Company in 1898, the company changed its name to Beatrice Foods Co. in 1946 to reflect the change from primarily dairy foods to grocery products. At the 87th annual meeting of Beatrice stockholders on June 5th, 1984, stockholders of record were asked to change the name of the company. “Recognizing this clear departure from the past, we are proposing a new name for the company. At our annual meeting in June, stockholders will be asked to change the name to Beatrice Companies, Inc. from Beatrice Foods Co. This change is appropriate given the company’s evolution and present composition. It reflects Beatrice’s wide range of separate and distinct businesses, many with operations totally unrelated to food processing, yet retains the company’s goodwill and reputation for quality products and services.” Annual Report, February 29, 1984.

To this day, we are still known as Beatrice Companies, Inc., with varied business units.

To inquire on more details on the rich history of Beatrice, click on the Beatrice Foods Co. link above.

Beatrice From Buildup Through Breakup 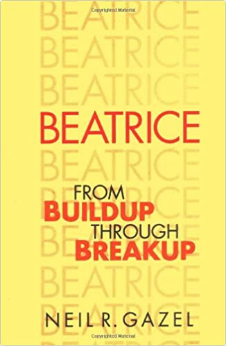